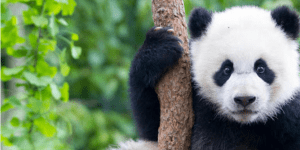 Giant pandas are instantly recognizable as a species, but their uniform black and white markings makes them fairly anonymous as individuals. At least, to human eyes.

Not so for artificial intelligence, as researchers in China have developed an AI-powered facial recognition app that can identify specific pandas.

The app is available at the Chengdu Research Base of Giant Panda Breeding in southwest China, where visitors will soon be able to use it to identify any of the facility’s dozens of captive giant pandas, and find out more information about them. The app’s creators also hope the software will be a boon for scientists, who can use it to track the bears in the wild.

“The app and database will help us gather more precise and well-rounded data on the population, distribution, ages, gender ratio, birth and deaths of wild pandas, who live in deep mountains and are hard to track,” Chen Peng, a researcher who co-authored the paper Giant Panda Face Recognition Using Small Database, said.

“It will definitely help us improve efficiency and effectiveness in conservation and management of the animals,” said Chen.

Conservation efforts in recent years have boosted the wild panda population, but the total number is still small; less than 2,000 individuals, all found in China’s mountainous regions.

Like other facial recognition systems, the app was built using a huge database of panda pictures. Plenty of images and videos were used to train the algorithm, which looks at a number of key elements — including the shape of the mouth, the size of the ears, and the markings around the eyes — to identify individuals.

At Chengdu Research Base of Giant Panda Breeding, the software will be used to track the feeding schedules of individual pandas as well as their genealogy.

One researcher who helped build the app said on the social networking site Weibo that the app would also help human-panda relations: “You no longer need to worry about making the pandas angry by calling them by the wrong name.”