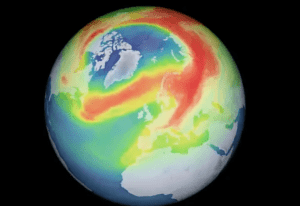 Scientists told that the 1 million sq km wide hole above the Arctic has been fixed now. The hole was found earlier this month as a result of low temperatures at the north pole. It would have been a threat to humans if it moved South with the air currents. CAMS confirmed the hole has healed itself in the Earth’s ozone layer but the healing has got nothing to do with COVID-19 lockdown, instead it’s because of the polar vortex.