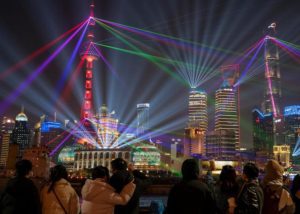 Shanghai on Monday, the first working day of 2021, began construction on 64 major projects, with a total investment of 273.4 billion yuan ($42.2 billion), covering high-end industries, scientific and technological innovation, infrastructure and major livelihood sectors, in a bid to be the key window and benchmark for the construction of modern society.

Among the 64 projects, 52 are from major industries and scientific projects, covering integrated circuits, biomedicine, AI, aerospace, new materials, high-end equipment and finance; 12 are related to infrastructure and rental housing, according to the Shanghai municipal government on Monday.

As the world’s gathering place for high-end production, Shanghai is responsible for “leading the nation’s industrial innovation,” Shi Jianxun, an economics professor at the School of Economics and Management of Tongji University in Shanghai, told the Global Times on Monday, noting that the 64 major projects not only serve Shanghai’s economy but also the national economy under the new pattern of “dual circulation,” acting as a hub connecting the domestic and international industrial and supply chains.

The COVID-19 pandemic has put biomedicine into the spotlight around the world. China’s leading drug maker and distributor Shanghai Pharma invested nearly 8 billion yuan in building a platform to provide innovative incubation services and industrialize biomedicine. It will focus on therapeutic antibodies, cell and gene therapy, and other biomedical innovation sectors.

A number of innovative anti-cancer drugs are currently in various clinical stages in Shanghai, with industrialization platforms urgently needed to ensure that R&D products can be produced, according to a document Shanghai Pharma sent to the Global Times on Monday.

What’s more, Shanghai Pharma is building a vaccine production base with an annual output of 200 million doses.

It’s essential that Shanghai performs well in gathering global innovation elements, as this will enhance China’s competitiveness and maintain national economic security, as the city acts as a good model in innovative development, Shi said, noting that Shanghai has the ability to attract high-end talents, which is one of the key factors in building an innovative center.

Among the other projects, the construction of the second phase of China State Shipbuilding’s base in Shanghai kicked off on Monday on Changxing Island in Chongming district, aiming to boost the country’s shipping and marine industries.

With an investment of 18 billion yuan, the new base will include R&D buildings, and assembly and welding workshops. It is scheduled to be completed by the end of 2023, and comes with the capacity to build six special purpose ships annually.

Sinopec Shanghai Petrochemical Co — one of the largest refining-chemical integrated petrochemical companies in China — on Monday kicked off the project with an annual production of 24,000 tons of precursor and 12,000 tons of 48K large tow carbon fiber, with an investment worth 3.5 billion yuan. It marked the first of its kind in China, as it aims to make breakthroughs in industrialization technology.

The project will be completed in 2024; it is expected to change the current situation in which China is dependent on imports, with a short of supply of such technologies for a long time.