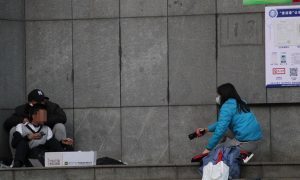 Chinese netizens hailed the heroic deeds of a woman in blue seen in online videos not only approaching a kidnapper holding a knife against one of his abductees, but also helping calm him down, winning an opportunity for the SWAT team to shoot the kidnapper dead on the spot in Kunming, Southwest China’s Yunnan Province on Friday.

Unlike what many may have guessed, that the lady in blue was most likely a negotiator sent by police, Kunming’s journalist association told media that the woman was in fact a reporter with the Yunnan television and radio station, having only recently received her press card.

Local media reports said that the kidnapper demanded a chance to talk for 10 minutes with the female reporter, and her only, which led to the close-quarters conversation between him and the woman in blue.

According to the Yunnan television and radio station, the proximity between the two was some three meters.

The reporter, who just started her career, is undergoing psychological counselling having . She was frightened by the incident, the operator of the official Sina Weibo account of the Yunnan television and radio station told the Global Times on Saturday.

The operator declined to reveal further information of the reporter.

“Constantly talking to the kidnapper, she played a vital role in calming him down, winning a chance for police to take a shot at the kidnapper,” media reported, citing personnel with Kunming’s journalist association.

A hashtag regarding the incident #Kunmingwomanjournalist has gathered more than 150 million views and some 20,000 comments as Saturday.

Many gave their thumbs-up for the brave girl who stood up in the dangerous situation.

The suspect, a 56-year-old man surnamed Wang, stabbed seven people and took a hostage at the gate of a middle school in Kunming at about 5 pm Friday, the Xinhua News Agency reported.

The people stabbed by Wang were rushed to hospital. One of them died in hospital after treatment was unsuccessful.

After a nearly two-hour standoff, police killed Wang at around 6:40 pm and rescued the hostage who suffered injuries.