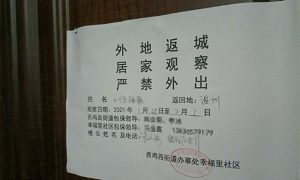 A residential community in northeastern China apologized on Monday for sealing the doors of residents who returned from other cities to celebrate the upcoming Chinese New Year holiday in an attempt to implement the central government’s COVID-19 prevention policies by preventing the residents from leaving.

A resident who recently returned to their home at Xingfuli residential community in Jixi, Northeast China’s Heilongjiang Province, complained that they had been sealed into the house by the community officials, Xinhua News Agency reported on Sunday.

According to a photo Xinhua posted online, the door of the resident’s home was sealed with paper strips and a notice saying that the person returned from Wenzhou in East China’s Zhejiang Province, and they were not allowed to leave between January 25 and February 1 for medical observation purposes.

Wenzhou, however, hasn’t reported a local COVID-19 case for over 340 days, and is therefore classified as a low-risk area for the epidemic. China’s national healthy authority doesn’t require those people returning from low-risk areas to be quarantined, Xinhua said, criticizing the “one-size-fits-all” approach the community adopted as “meaningless” for epidemic control.

The residential compound later removed the sealing strips and apologized to the residents involved after the incident sparked wide outrage on Chinese social media platforms over the weekend, said the director of the compounds’ neighborhood committee, surnamed Ma.

The committee officials who sealed residents in their homes “misread the upper government’s epidemic prevention policies,” Ma told the Global Times on Monday.

Rather than undergo compulsory self-isolation at home, local residents returning from low-risk areas only require general “health monitoring” during their stay amid the holiday period, which involves voluntarily reporting their body temperatures to the community every day, Ma said.

There are over 9,200 households and more than 20,000 residents living at Xingfuli residential community. More than 200 local families have had family members return from other cities for Chinese New Year since January, according to Ma.

This year’s Spring Festival holiday will start from February 11 until 17. China’s central health authority urged regional governments to neither add new restrictions on top of the central government’s policy nor adopt “one-size-fits-all” approaches, which are “indolent of their duties” and a “waste of precious COVID-19 prevention resources,” Mi Feng, spokesperson of National Health Commission, said at a press conference on Sunday.

The epidemic-prevention authority in Jixi’s Jiguan district, where the community is located, told media on Sunday that it was asking all local residential communities to investigate and correct their improper behaviors in virus control work.

The Jiguan district epidemic-prevention team told the Global Times on Monday that it won’t force returning residents to stay inside, but will encourage them to stay at home as much as possible during the holiday period to reduce any possible transmission of the coronavirus.

The district, however, hasn’t totally ruled out sealing certain residents’ houses. “If a returning person was reported by their neighbors for frequently, unnecessarily hanging around, we may still seal his or her door with strips,” said a staffer with the team’s consulting hotline.