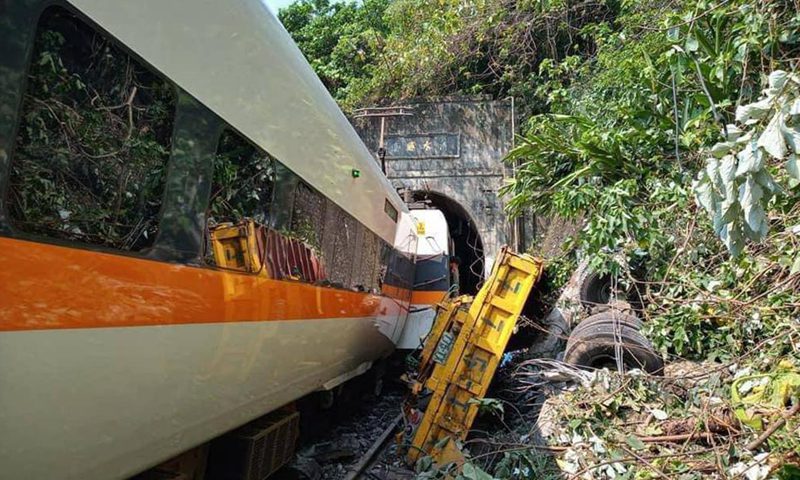 The Friday train crash on the island of Taiwan that has killed at least 50 has drawn great attention from people in the Chinese mainland, who have been expressing condolences to Taiwan compatriots over the deadly train accident and extending sympathy to families of victims while calling for investigation and accountability of the accident.

Observers noted that the long-standing slack safety management in Taiwan’s railway system plus poor infrastructure facilities have often caused the situation that some train accidents could not be effectively avoided and the local authorities should conduct self-examination and spend more energy on improving people’s livelihood instead of focusing on playing with politics.

The train crash has killed at least 51 people and injured 177, in what is the worst train accident in four decades on the island, media reported on Saturday. The No. 408 Taroko train hit a construction vehicle which slid from a hillside and derailed in a tunnel, investigation showed.

Xi Jinping, general secretary of the Communist Party of China Central Committee, has mourned for compatriots killed in the train derailment in Taiwan on Friday.

He sent sincere condolences to the families of the deceased and expressed sympathies to the injured and wished them a speedy recovery.

Previously, the State Council Taiwan Affairs Office, the Association for Relations Across the Taiwan Straits and the All-China Federation of Taiwan Compatriots have expressed their condolences and mourned for the victims of the accident and their families, the CNR reported.

The rescue work was still undergoing on Saturday morning. Local railway administration said it will take seven days to fix the site in order to reopen for traffic.

A student from the Chinese mainland got slightly scratched in the accident, the Mainland Affairs Council of the island said on Saturday.

As of press time, the topic “Taiwan train derailment” has garnered more than 190 million views with 54,000 comments on Sina Weibo, with many people paying their tribute. “I hope there would be no more casualties, and everybody is safe,” read one comment; “Accountability should be conducted to seek justice for the victims,” said another.

The Friday tragedy is not Taiwan’s only train accident in the past few years.

A Puyuma express train with 366 passengers on board derailed on October 21, 2018 in Yilan county, leaving 18 dead and more than 200 injured. Multiple factors and anomalies coincidentally happening at the same time caused the accident, an official investigation showed.

Another accident nearly happened on Friday night as the high-voltage above the railway track broke while another Taroko train was passing. At least five explosions were heard by witnesses, local media reported.

Taiwan island’s slack safety management in its railway system and inadequate infrastructure construction has long been criticized. They have gradually fallen behind that of the mainland and cannot keep up with the needs of the people. Observers have noted that political reasons are the main culprit among a slew of many other causes.

“The Taiwan authorities spent huge amount of money buying weapons from the US, but refuse to improve people’s daily life,” a net user commented.

“The accident showed that the local administrative departments have problems in safety management, but above all, it reflects some deeper and long-existing problems on the island,” Lü Cuncheng, a research fellow at the Institute of Taiwan Studies of the Chinese Academy of Social Sciences in Beijing, told the Global Times on Saturday.

“The Democratic Progressive Party authority has been neglecting people’s livelihood, but mainly focuses on politics. It regards politics as its central work. It should spend less energy on politics,” Lü noted.