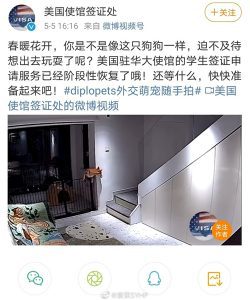 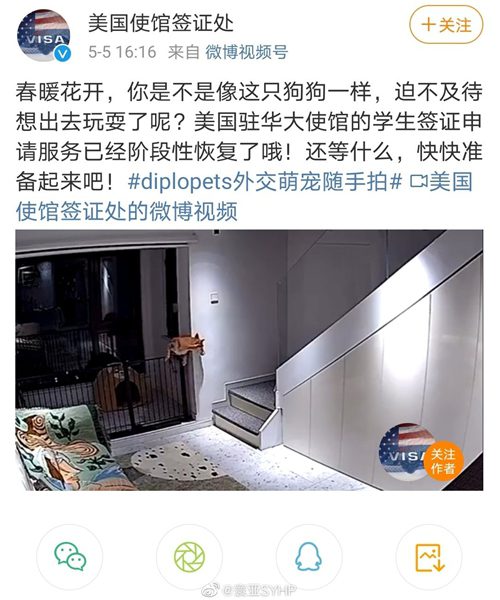 The visa office of the US Embassy in China has come under fire on Chinese social media as netizens pointed out its account has compared Chinese student visa applicants to dogs in a controversial post, which some net users said was “pure racism that has hit the lowest of the low.”

The post, published by the visa office on Sina Weibo, China’s Twitter-like platform, on Wednesday, one day after the US Embassy resumed visa processing for Chinese students, said that “As Spring blossoms, are you the same as the puppy, eager to go out and play?” before informing students about the visa application resumption.

A video of a dog, struggling to jump over a fence that trapped it in a tiny balcony and trying to reach out, was posted along with the words.

The post soon ignited Chinese netizens’ anger as many believed the US Embassy had compared Chinese students to dogs. Those indignant web users called it “blatant racism.”

“I am shocked to my very core about the embassy’s hitting the lowest of the low. Putting such things in an online post has fully exposed the country’s racism,” said one Sina Weibo user named toumingjun.

Hashtag “US Embassy compares Chinese students to dogs” soon was trending on social media, which attracted more than 800,000 reads within three hours after its publication.

The US Embassy suspended visa applications for Chinese students last year amid the COVID-19 pandemic. However, Chinese students’ willingness to study in the US has been gradually waning, after the two countries became locked in a series of competitions, including trade and technology disputes, and the former US administration continuously imposed restrictive and discriminative visa policies on Chinese students with certain backgrounds.

Last year, a white paper co-issued by one of China’s biggest private education services, New Oriental Education, showed that the UK had overtaken the US to become Chinese students’ favorite destination for studying abroad.