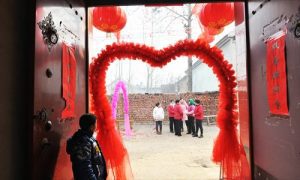 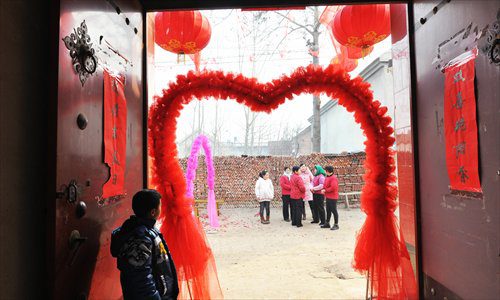 Wang Xiao , a 33-year-old worker at a clothing factory in East China’s Jiangsu Province, has very low self-esteem for not having married at this age. Coming from a small village in Central China’s Henan Province, he has been longing to find a suitable partner for nearly nine years.

“When people ask me whether I am married or not, I feel very angry; I shout at them ‘none of your business,’ but actually I’m very worried. Maybe I will be single for the rest of my life.” Wang told the Global Times.

This means that a large number of Chinese men may not be able to find a wife, said Xu Tianli, head of the Shanghai Marriage Introduction Organization Administration Association, adding that “most of them live in rural areas.”

A survey on 267 villages in all 31 provinces in the Chinese mainland showed that, single men and women accounted for 5.92 percent and 3.62 percent respectively. In other words, there were 63 single women for every 100 single men, according to the survey conducted by the Central China Normal University in 2017.

The gap in the number of marriageable men and women has put pressure on many men, particularly in many rural regions, where people tend to prefer boys to girls, said Liu Zhijun, Deputy Director of the Social Science Experiment Center of Zhejiang University. “Women in these areas are usually fewer than men as a result of selective abortion in the past decades,” Liu told the Global Times.