A deputy to the National People’s Congress (NPC) has recently attracted criticism from netizens after he suggested an extension of the maternity leave to three years during an interview with media on Monday.

The recommendation was made by Zhu Lieyu, deputy to the NPC and lawyer, after China announced on Monday a new policy that allows couples to have three children. Zhu also suggested that more pro-natalist policies should be introduced to help increase young people’s willingness to bear children, according to an interview with Red Star News on Monday.

Zhu said that an extension of the maternity leave can give mothers enough time to take care of their children after giving birth, until the children were admitted into care institutions such as kindergartens. “During the three-year period, female employees should enjoy the basic salary, which should be shared by both the enterprises and the nation,” said Zhu.

Zhu mentioned that the reason of the falling fertility rate in recent years is the increasing costs of having a child or the lack of time to take care of children due to parents’ work.

Today, the maternity leave for female employees is 98 days, and those employees who have twins or more shall be granted an extra maternity leave of 15 days for each additional baby born, according to Special Rules on the Labor Protection of Female Employees issued in April, 2012.

Zhu’s recommendation triggered a widespread criticism on the internet over these days. The related hashtag was viewed about 710 million times with over 60,000 comments as of Wednesday on Chinese Twitter-like social media platform Sina Weibo.

Criticism focused on the legislator’s lack of consideration for the real situation women are facing in the workplace and the difficulties for women to find a job. 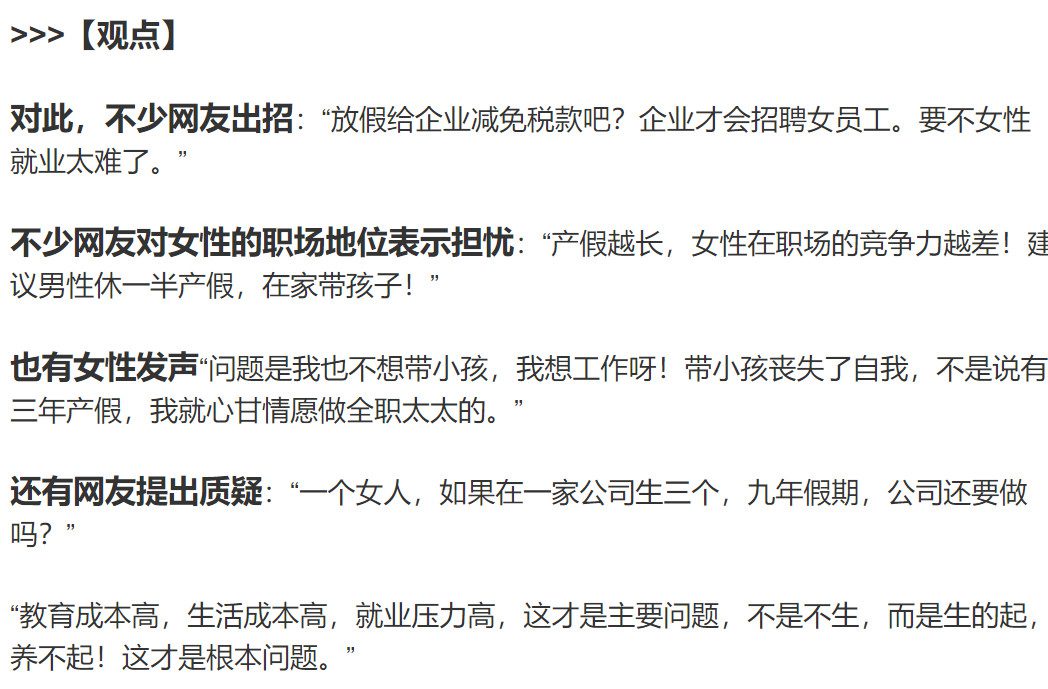 “Who wants to hire someone who takes three years of maternity leave?” a netizen questioned, while another criticized that “women should not be the only ones to shoulder the responsibility of raising children and they have the right to achieve self-fulfillment.”

China on Monday announced a further relaxation of its family planning policy, allowing each couple to have up to three children, after the number of newborns in the country declined for the fourth year in a row, a major policy shift from the current two-child policy.

A Beijing-based analyst mentioned on Wednesday that the recommendation “fails to address the anxieties of women of reproductive age.”

“Three years of maternity leave means that women need to sacrifice their right to work to give birth to a child, and employers at the same time, would also have to pay a cost that is hard for both the economy and human resources management, which has changed the relationship on both sides,” the analyst said.

“We should realize that women having children is not only to give life to the next generation of their own family, but also to produce labor for the whole society, and the whole society should bear the cost and try to improve the welfare of women,” Xi Heng, professor at the School of Public Management of the Northwest University in Xi’an, Northwest China’s Shaanxi Province, told the Global Times on Wednesday.

Xi believes that the contribution of women, including childbirth and housework, should be recognized in the law.