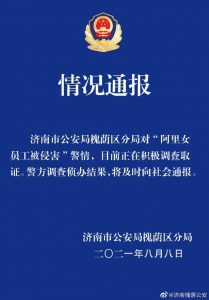 Police in Jinan, East China’s Shandong Province have launched a probe into a sexual misconduct case involving a female employee working at Chinese e-commerce giant Alibaba, who reported she was sexually assaulted and raped by a senior employee during a business trip.

The firm’s response came after Chinese social media was ignited after the claim-to-be victim alleged online that during a business trip to Jinan on July 27, a senior colleague, surnamed Wang together with Zhang, an employee from Jinan Hualian Supermarket, had forced her to drink to excess and that Wang had gone on to rape her while she was drunk at a hotel.

The sexual allegations pushed Alibaba to the forefront of public comment starting from late Saturday. At least eight most read stories on Twitter-like social media platform Sina Weibo are related to Alibaba. One of the hashtags “Alibaba” has garnered nearly 2 billion views over the weekend.

Amid public opinion brewing online, Alibaba’s CEO Zhang Yong, also known as Daniel Zhang, replied that he was “shocked, angry and shameful” over the scandal. He vowed to fully investigate the case, with its results to be made available to all Alibaba staff.