The procuratorate in Harbin, Northeast China’s Heilongjiang Province approved on Monday the arrest of Chen Chenglong, who is suspected of committing intentional homicide in the murder of an epidemic control volunteer on February 3.

Zhang, the volunteer, was allegedly stabbed by Chen with a knife when Zhang was on duty managing the personnel entering and exiting the community in Hulan district, where Chen lives, Harbin police announced on February 3.

Zhang was sent to hospital for treatment but later died. Chen was taken into custody after the incident occurred.

Reports said that Chen committed the crime after he was stopped by Zhang when he tried to leave the community. After a resurgence in COVID-19 cases hit Harbin, Zhang, 42, became a volunteer in the fight against COVID-19 and was on duty in the community, reports said.

China has been taking strict measures to crack down on illegal behaviors related to epidemic control. More than 7,200 people across the country have been arrested for related crimes and over 11,200 people prosecuted since the first COVID-19 outbreak, the Supreme People’s Procuratorate of China announced on February 2.

Ma Jianguo, a man in Southwest China’s Yunnan Province, was sentenced to death in March 2020 for killing two epidemic control staff in February and was executed in July. 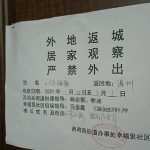 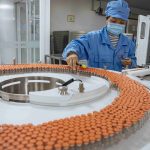