Lionel Messi does ‘Hand of God’ during Argentina’s win over Netherlands Shortpedia Content Team 12:40:00 PM, Saturday 10th of December 2022 | in sports Image Credit: FPJ Lionel Messi is the greatest footballer to play for Argentina after the legendary Diego Maradona and the La Albiceleste skipper replicated the infamous act of the World Cup-winning skipper on the field. No, it’s not a goal scoring feat but a act which has divided the football fraternity. Messi, during the team’s win over The Netherlands, was seen handling the ball and fans were quick to compare it with Maradona’s ‘Hand of God’. 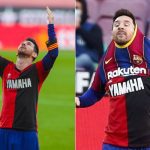