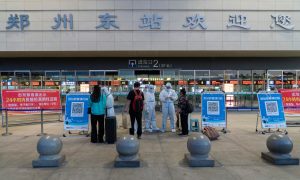 Five officials from Zhengzhou, in Central China’s Henan Province, were punished for abusing the health code system, the city’s commission for discipline inspection and supervision announced on Wednesday.

The punishment came after an investigation following complaints from residents about their “heath codes turning red” without any reason. Media previously reported that the health codes of some clients of small rural banks in Henan, which were reportedly caught in an illegal fundraising scheme, suddenly turned red, meaning high infection risk and ban of movement. The sudden change in the codes happened when they tried to withdraw their savings which raised concerns of suspected abuse of the health code system.

According to a statement released by the commission on its official WeChat account, Feng Xianbin and Zhang Linlin, director and deputy director of the social control guidance department of the city’s epidemic prevention and control headquarters, made the decision of changing to red the health codes of some clients of the rural banks involved without authorization.

Authorized by Feng and Zhang, a local official from the stability maintenance body and another from the health code management department, in addition to the deputy general manager of a local big data company, changed to red the health codes of the banks’ clients who scanned venue codes in Zhengzhou.

The behavior of these officials of arbitrarily granting red codes to those who were not eligible has severely damaged the seriousness of the regulations governing the use of health codes, and left a seriously bad social influence which shows their weak legal awareness and consciousness, the statement said.

According to the statement, Feng and Zhang were held mainly accountable for the violations while the rest were held liable for direct responsibilities.