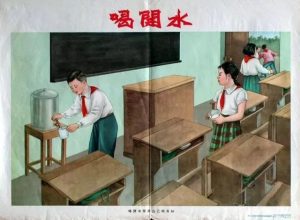 The habit can be traced back to public health campaigns that encouraged it for health and hygiene reasons.

The first time I rode the rails in China, I was caught off guard by the water dispenser.

Instead of the usual options for hot, cold, and room temperature, the machine on the train only had one button—for boiling hot water.

That meant if you didn’t want to buy bottled water from the wandering food carts, the only option was to fill up a canteen with scalding H2O.

But everyone happily did it. Young, old, male, female, from train staff to train passengers—people made their way to the hot water dispenser to claim their fill.

For many outsiders, the Chinese love affair with hot water is perplexing, so much so that it is one of the most searched questions about Chinese people on Google.

“In Vancouver, where I’m from, whenever my mom and her friends eat in a Western restaurant, they like to order hot water with lemon,” says Bernice Chan, a writer in Hong Kong. “The waiters and waitresses call these drinks ‘Chinese martinis.’”

Casual racism aside, there is a general preference for hot water in China. Since the early 20th century, there have been public health campaigns encouraging the consumption of warm water.

In the 1930s, when the Nationalist government was consolidating its power in China, it launched a civic movement called the New Life Movement that, among other things, encouraged people to drink warm water because it was seen as cleaner.

Even after the Nationalists lost power to the Communists, government backing of hot water remained. From 1952 onward, the Communist government launched several public health campaigns that encouraged people to drink warm water, shaping the habits of generations.

“In China, not every company has a lounge or breakroom, but it will have a room for water dispensers,” says Zhang Guowei, a professor at Henan University who studies the history of Chinese customs. “And it will definitely have hot water.”

It was an effective way to keep warm

Before the advent of central heating, it was hard to keep warm during winters in ancient China.

Although there are records of cotton production in China dating back more than 2,000 years, the material only came into wide use for warmth during the Ming Dynasty (1368-1644).

“Before that, it was very hard to keep warm,” Zhang says. “But drinking hot water could, to some extent, protect you from the cold.”

It was believed to help kill bacteria

Like many early human settlements around the world, villages in ancient China were built close to major rivers for easy access to water.

But the water drawn from natural sources contained millions of microorganisms that could potentially make people sick.

Chinese people believed boiling water was the easiest way to kill most of the harmful bacteria.

Perhaps the singular reason why the habit of drinking warm water has persisted for so long is because of traditional Chinese medicine.

The earliest known work on traditional Chinese medicine, the Huangdi Neijing 黄帝内经, written over 2,000 years ago, prescribes warm water as an effective regulator of health.

“It talks about how drinking cold water would hinder the organs from functioning properly,” says Cinci Leung, a traditional Chinese medicine practitioner in Hong Kong. “And that’s why it’s just essential for Chinese people to have a habit of drinking warm water.”

A core tenet of traditional Chinese medicine is balance between yin 阴 and yang 阳, meaning roughly cold and hot energy. Imbalance is believed to cause a wide range of ailments.

“Drinking warm water can nourish the yang in your body, which is like the powerhouse of your body,” Leung says. “Food digestion and also nutrient absorption depends a lot on the spleen and the stomach, which is powered by the yang.