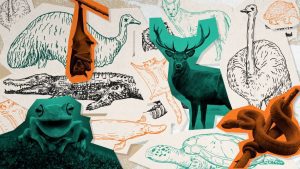 Why do Chinese people seem to eat ‘everything’?

The reasons lie in China’s history, geography, and how you define ‘everything.’

As a Chinese-Indonesian whose grandfather came from Guangdong Province, the birthplace of Cantonese cuisine, it wasn’t so much a joke as it was a point of pride. He came from a place of culinary diversity, and he wanted his children to have an equally diverse palate.

Unfortunately for him, I became an extremely unadventurous eater. When I was 9 years old, my father tried to make me eat a bite of sea cucumber. I refused, and it became such a battle of wills that I left the dinner table in tears and locked myself in my room. My father told me, “You’re not Chinese because Chinese people eat everything.”

The Chinese diet is back in the spotlight. Comments about the Chinese people’s apparently limitless palate—from staples like bird’s nest soup, made using the solidified saliva of swiftlets, to rarer offerings like dog and bat meat—abound on social media.

So why does this stereotype exist? It is true that Chinese cuisine contains animal products which don’t exist in other culinary spaces, but much of that has to do with history, geography, and culture. Here are four reasons why Chinese people seem to eat “everything.”

Reason 1: China is one of the most biodiverse places on earth.

Nowadays, the world mostly consumes beef, pork, and chicken, but this wasn’t always the case. Before the advent of industrial farming in the 20th century, it was not unusual to find protein outside of these three options.

Horse meat was once a very common sight on Britain’s high streets, and only fell out of favor around the 1930s when the public began to identify the animals more as companions and pets.

Guinea pigs have been a staple in Peru’s Andean diet for around 5,000 years and still continue to be a common source of protein there. Many Americans in the South grew up eating alligator meat.

Before industrial farming and globalization, people around the world ate whatever plants and animals were accessible to them, and China was no different.

The country is one of the most biodiverse in the world, containing nearly 10% of all plant species and 14% of all animal species.

The only difference between China and the rest of the world is that it happens to have a bigger buffet from which to choose.

For example, bear bile is used to treat liver and gallbladder conditions. Donkey hide, or ejiao 阿胶, is believed to improve blood circulation and treat conditions like anemia. If you suffer from asthma, a doctor of traditional Chinese medicine might encourage you to eat more bat meat.

Texts on traditional Chinese medicine include more than 1,500 animal species that can be used for medicinal purposes. Thus, many of the more controversial Chinese dishes that Westerners won’t touch are not everyday dishes that average Chinese would put on the dining table. Rather, they’re medicine used to treat specific diseases.

Reason 3: Most Chinese people do not follow a religion and have no dietary restrictions.

Many world religions have guidelines surrounding food. Islam has halal, Judaism has kosher, Hindus don’t eat beef, and some Buddhists abstain from meat.

But in China, 90% of people identify themselves as irreligious, and society overall doesn’t have the same kind of taboos surrounding what can and can’t be eaten.

Reason 4: The Chinese government supported the domestication of wild animals.

Sensing that the burgeoning wildlife industry might help feed people in rural areas, the government backed these farms. A 1988 law encouraged the domestication and breeding of wildlife for various purposes, including for food.

In recent years, though, as China has gotten wealthier, the government has clamped down on wildlife consumption. In 2016, the law’s language was revised to encourage domestication and breeding specifically for scientific research and preservation.

But by then, the wildlife farming industry was already booming, employing millions of people and feeding millions more.

Still, only a minority of Chinese people actually consume wildlife.

In a survey conducted this year by a wildlife conservation agency in China, less than 1% of respondents said they would continue to eat wild animals. (About 10,000 people were surveyed.)

When it comes to actual consumption, most Chinese stick with chicken, beef, and pork, which altogether make up nearly 90% of livestock production. In fact, pork is the most popular meat in Chinese cuisine, accounting for more than half of livestock.

So why is there this global fascination with the weird fringes of Chinese cuisine?

Accusations of Chinese people eating questionable meat date as far back as the time of Marco Polo, when he called Chinese people “barbaric” for eating snakes and dogs.

It continued into the 19th century, when Chinese immigrants started moving to the United States. Their eating habits became a way to alienate them in a new country.

“Chinese people eat everything, but so do many other cultures around the world,” says Goldthread producer Clarissa Wei. “Once upon a time, everyone ate everything.”

In Peru, the guinea pig is a beloved protein source. The French have a taste for frogs, and In Florida, alligators are a popular dish.

But you rarely hear complaints about the bizarre diets of the Peruvians, French, and Floridians.