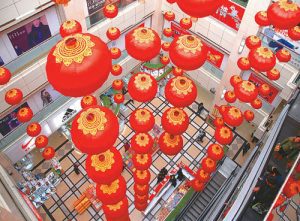 Chinese to stage a shopping spree as Spring Festival approaches

For years, China has been known as the factory of the world. That has not changed, especially during the COVID-19 pandemic, when China supplied everything from personal protective gear to daily goods for countries around the world. But as China readies for the upcoming Chinese New Year, the world is supplying everything from seafood, alcoholic beverages to designer bags to China.

Lifted by a confluence of factors from a robust economic recovery to epidemic prevention control measures to massive consumption-boosting measures, Chinese consumers are spending big on new year-related products, including imported products, according to industry data and analysts.

In Ningbo, East China’s Zhejiang Province, a local shopping festival for imported holiday-related goods kicked off on Wednesday, offering everything from Vietnamese nuts, hand lotion from Bulgaria, chocolates from Switzerland and coffee from Malaysia.

In Shenzhen, South China’s Guangdong Province, customs authorities are scrambling to ensure a safe and steady supply of imported products for the holidays with faster clearance process and enhanced anti-virus measures, as imports have increased significantly ahead of the Chinese New Year.

Online, China’s e-commerce shopping platforms are planning huge sales promotions. Alibaba’s Tmall said that more than 20,000 foreign brands from over 80 countries and regions are participating. Pinduoduo said that it has planned discounts worth 10 billion yuan ($1.55 billion) and direct shipping for its own sales event for imported goods.

“As many were unable to travel abroad over the past year, purchasing authentic food and other products from around the world would make the New Year celebration more diverse,” a representative for Tmall was quoted by media as saying.

These bustling scenes across the country are contributing to a massive surge in sales of imported holiday-related goods. In the second half of January, Alibaba’s logistics arm Cainiao said that packages of imported goods jumped 70 percent from the previous months, due to rising demand for holiday goods.

Nationwide, from January 20-29, online sales of holiday goods reached 344.11 billion yuan, according to the Ministry of Commerce, which, along with several other government departments, organized an online shopping event for holiday-related goods. Sales of partly prepared food surged 375.6 percent year-on-year, according to the ministry. Fitness equipment also increased, with sales of jumping ropes increasing 351.1 percent.

“This year, many Chinese will celebrate the New Year differently with the ‘stay in place’ regulations; but that will not affect spending, because there are also new ways of shopping,” Cao Heping, a professor at the School of Economics of Peking University, told the Global Times on Wednesday, noting that overall consumption will be robust this year driven by online sales.

In wake of cluster outbreaks of the COVID-19 in some areas, workers around the country are being asked to stay where they worked for the holidays to prevent the spread of the virus. Cao said that while travel has been affected, online spending has grown considerably because many would still exchange gifts during the holiday.

Though there are some concerns over reports of packages of imported cold-chain products carrying the virus, overall supply has not been disrupted and the massive sales promotions would help sales of imported products to increase this year, according to Liu Dingding, a Beijing-based internet analyst. “After some inspections and disinfection, many consumers will still choose imported products,” he told the Global Times.

While domestically made goods are still the mainstream, products from almost all corners of the globe — from Africa to Europe and from North America to other parts of Asia — are getting increasingly popular.

“It is true this year that Chinese people are celebrating the Lunar New Year with supplies from the entire world. China’s domestic consumption has become a driver for the global economy,” Cao said.

But some products such as those from Europe and Southeast Asia fare much better than those from places like Australia, reflecting China’s growing appetite for foreign goods, COVID-19’s impact on supply chains as well as trade relations.

Some US products, particularly agricultural goods such as nuts, are also popular during the holidays, according to some platforms, while snacks and other food products from Southeast Asia are also big hits among Chinese consumers.

Rising demand for European products particularly stands out, as many places across the country saw more freight trains from Europe arrive ahead of the Chinese New Year. In Chengdu, for example, the China-Europe freight train brought 67 containers of products, including baby formula, chocolates and alcoholic beverages, just over the past month, according to rail authorities in the city.

Also standing out was the waning popularity of certain Australian products, particularly wine. On top of COVID-19 disruptions, a 212-percent anti-dumping tariff recently imposed by China has seriously undermined Australian wine’s competitive edge in China, with exports to China expected to drop as much as 95 percent.

That is also reflected in China’s overall trade. In 2020, China’s imports from the EU rose by 2.6 percent year-on-year and those from ASEAN jumped 6.9 percent, compared with a-4.6 percent contraction in imports from Australia, which has sparked serious tension with China.

Despite bilateral tensions, China’s imports from the US were up by 10.1 percent, largely due to China’s implementation of the phase one trade deal.