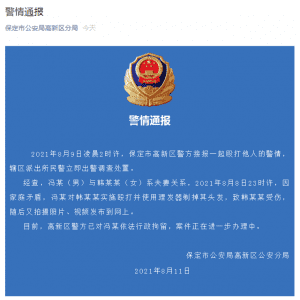 Police officers in Baoding, North China’s Hebei Province, arrested a man who beat his wife, shaved her head and published photos and a video of the incident online.

According to the police announcement on Wednesday, the police officers received the report at 2:00 am on Monday.

The video, which shows a bald-headed woman admitting to cheating on her husband, has circulated online since Monday.

However, Han said she was forced to admit she had an affair, or she would be beaten, the Beijing Youth Daily reported on Thursday.

According to the media report, Han said Feng was suspicious of her because of the messages she exchanged with other men. Feng’s suspicion was cemented when he saw a message she sent to another man saying “my husband came back, don’t send messages to me” on WeChat. Feng said the man has business dealings with her.

“I’m not feeling well and I have a lot of injuries,” Han said, noting that she did not want to disclose more details, the Beijing Youth Daily reported.

The police announcement said the case is under investigation.